Can’t see the forest for the trees… 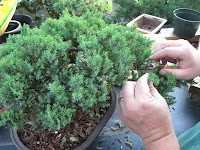 Nice to know my revelations are shared. Earlier this week, fellow blogger Natalie Whipple related her grandfather’s apple trees to writing in “Editing is much like thinning a crop.” When I read these words, I had just spent an evening watching hubby tend to his bonsai forest, reacting with much the same apprehension as Natalie as he cut back, trimmed and pruned. 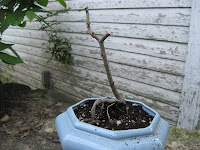 One beautiful little guy took what appeared to be a particularly hard beating. Hubby assured me it would be fine, he left just enough greenery on the stem for growth to continue. I try not to interfere with his projects. He’s certainly a better gardener than I am, but I couldn’t help asking, “Why such a drastic chop job?” Thankfully, he’s a patient man. He’s been trying to teach me this lesson since the early days of our dating life, when he dead-headed petunias at the local Putt-Putt Miniature Golf Course where he worked. Cut back the early, careless growth and the plant will thrive.

He has an impressive assortment of bonsai in varying stages of development, from beautiful, mature plants, to the wild child beginners, to the trimmed-back students. Last year, he bought a ragged, nearly-dead Japanese maple for next to nothing from Home Depot before they sent it back to the nursery, removed 75% of it and now has an elegant, orderly tree. Oftentimes, the branches he removes are repotted to sprout new bonsai. I’m always amazed at his results.

And yes, like Natalie, it all brings me back to writing. The beginners are like my first drafts, exuberant, a bit scattered, and definitely unruly. Some need careful editing, pruning back the erratic growth and trimming the excess. Others require harsher tactics, complete rewrites, maybe keeping only the kernel of the story, a character or two, and possibly the general plot while tossing the remains into me discard file. The WIP is freed from the burden of overgrowth with fresh potential to become the literary gem I want it to be, and with a little luck, some of those remnants will sprout new stories in the future.

I may need to add water (dramatic tension), maybe some organic fertilizer (setting, narrative description), and of course lots of sunlight (fleshed-out, driven characters), but at least now the story has a chance to thrive.

Kind of like hubby’s amazing bonsai.
Posted by clpauwels at 8:35 AM